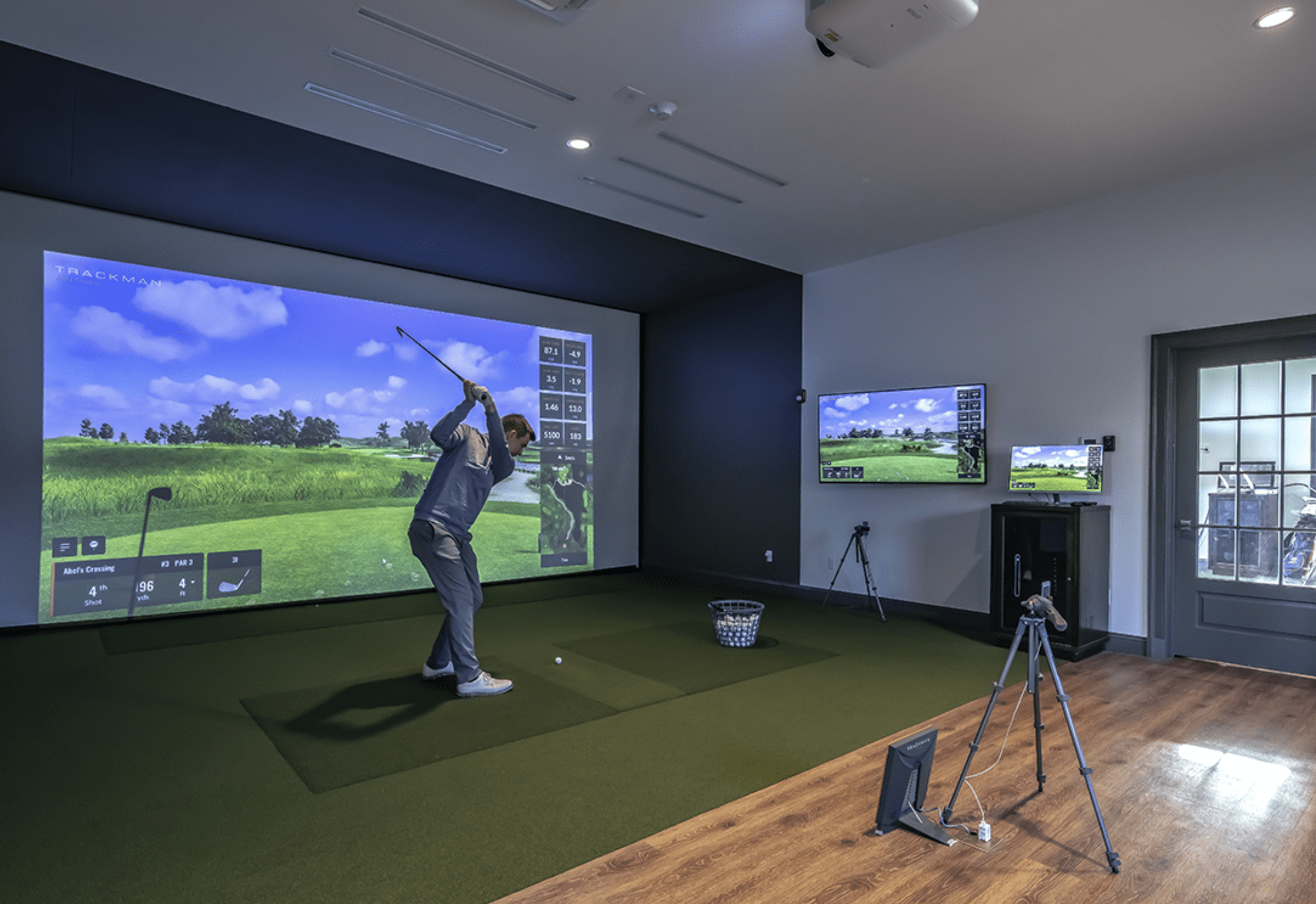 Playing golf in a simulator was an unsatisfying experience for a very long time. Then in 2018 new technology emerged, visually stunning and uncannily realistic. Manufacturers like Full Swing and aboutGolf continue to raise the stakes, adding features like flyovers of your shot from different angles plus real-time data points like launch angle, spin rate, ball speed and carry distance.

Use of those metrics is second-nature to veteran coaches, many of whom personally own an array of tech for swing diagnostics. But the massive projection screen and the famous fairways zooming at you in super hi-def—that’s another story entirely. Like a Tesla for wealthy golfers or an autonomous fairway mower for ritzy clubs, the new-age simulator is becoming a must-have. 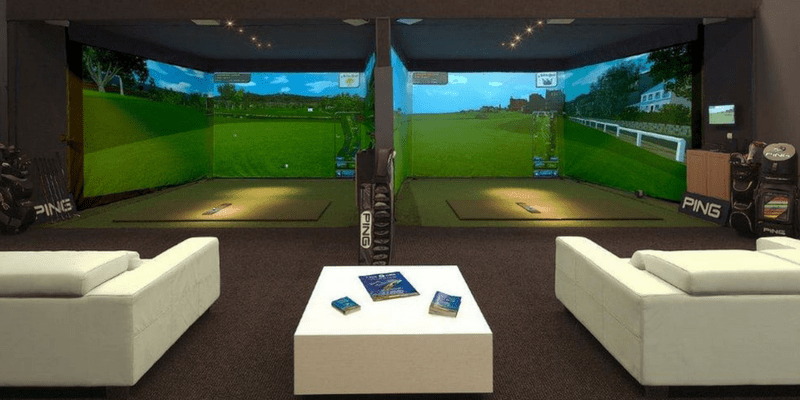 As a result, Proponent Group members find themselves being asked to contribute significantly to “sim room” development projects at their facilities—some are even spearheading the process. This is new territory for coaches, with a fairly long list of questions that need answers.

Justin Doyle, who directs the golf academy at member-only Woodbridge Golf & Country Club east of San Francisco, was asked by his club to oversee conversion of their bag room into a two-bay sim-golf facility. Justin’s pro forma financials have included fees for practice memberships and in-bay lessons or clubfitting, plus projected hardgoods sales and so forth. The revenue estimate he considers most tricky covers “renting out the space for private functions or booking time for members to play virtual rounds during inclement weather.”

His fellow Proponent member, Nicole Weller, found herself pondering similar questions. She’s trying to help prioritize the usage breakout for lessons, fitting sessions and casual member play—including how ROI factors into that decision-making. Nicole asked an interesting related question: “Who runs things when the golf shop is closed and the golf staff has gone home?”

A Proponent Group survey on this topic went out a few weeks ago, seeking intel on sim-room policy, programming and the various cost / revenue considerations. Before those responses get shared, it bears noting that simulator privileges can get sticky wherever dues-paying members have a lot of sway, principally at private clubs. Anecdotally, we’ve heard this from a few sources, including upstate New York-based Brian Jacobs.

“I was at a private club where they put in simulator bays with the idea that a lot more instruction and clubfitting would get accomplished,” reports Jacobs, who would see those best-laid-plans go awry. “I lost teaching time when they decided they could make more revenue through having members eating and drinking while they played their sim-golf, versus having my students in there.” Along with the loss of instruction time, professionals in Brian’s position run the risk of having to play gatekeeper as “open play” gives way to league events and the bay requires turnover duty, potentially even “cleaning up the mozzarella sticks,” as he recalls.

TrackMan sales director Matt Frelich has extensive experience selling his product into clubs for use in simulator bays, but so far he hasn’t come upon any facility or management group with a comprehensive policy guide and business plan for sim-room installations.

“We see some interesting solutions and applications from a physical standpoint,” says Frelich. “I’m talking about things like retractable screens, inflatable bays and synthetic hitting turf that can double as acceptable carpet in a club ballroom. But when it comes to prioritizing usage, those are tough issues that do need to be figured out.”

His reference to inflatable bays may have caught your eye. The clubs that have switched to that approach rave about the convenience factor, saying setup and tear-down can be accomplished in a fraction of the time conventional bay structures require. (YouTube videos tagged with “inflatable golf sim room” or similar search terms show just how convenient this option can be.) 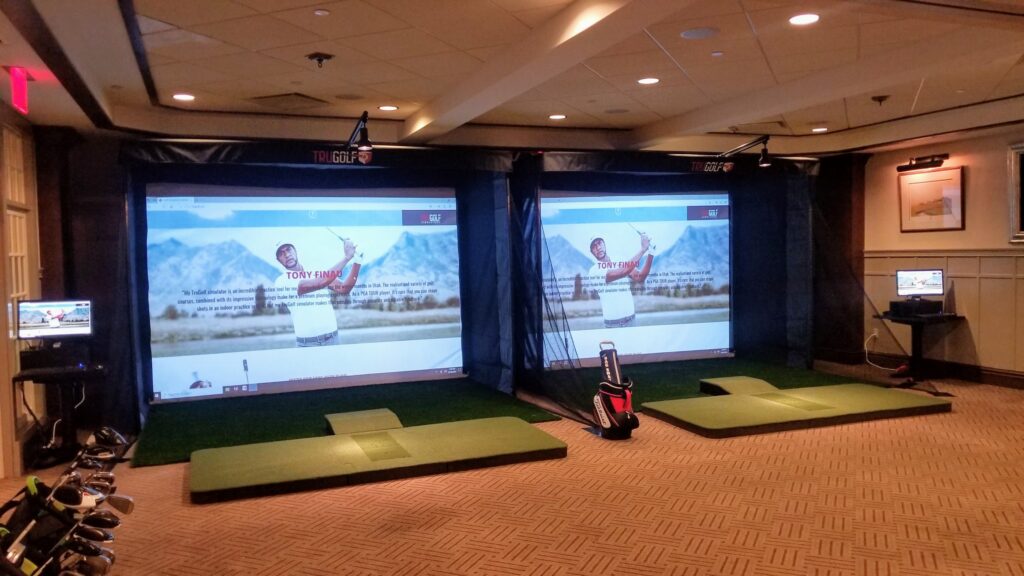 If you’re a coach who’s consulting on sim-room development, one intriguing thought arising from Frelich’s comments involves the sheer proliferation of this amenity. In the Atlanta private-club market, the new Atlanta In-Town Golf Club—basically a super high-end simulator lounge—based its business model on attracting country clubbers who might otherwise be using their own clubs’ sim rooms.

“Atlanta In-Town went with a membership model targeting people from the top area clubs and sold out before they opened,” says Matt. “You’ve also got Five Iron Golf in New York, Chicago and several other cities going the same route.” Instruction, fitting and leagues are key marketing elements for both brands. Then there’s the residential angle—TrackMan now does more business direct to consumers than to golf facilities. Since projecting demand is intrinsic to any coach’s input on sim rooms at clubs, the competition from upscale urban sim centers and in-home rigs has to be considered.

One way to be a hero with the management team you’re advising is to talk about privacy, as it relates to the drone-captured course photography and contour maps that get loaded into software. At Stanford University, golf coach Conrad Ray demanded exclusive use of the modern, sophisticated simulation of his school’s famed Cardinal Course. “He prohibited that from going public so rival teams couldn’t prepare on an equal footing with his players,” Frelich says. Prestigious private golf clubs have started insisting on a similar exclusivity, to keep their core business asset from popping up on projection screens worldwide.

Anecdotal research used to prep our survey revealed one significant tool for avoiding tussles over sim-use pecking order—not surprisingly, that tool is online scheduling. We asked whether “most or all usage of the simulator amenity is booked in advance through an online scheduler” and got a yes answer from 76 percent of survey-takers and a no from just 24 percent. 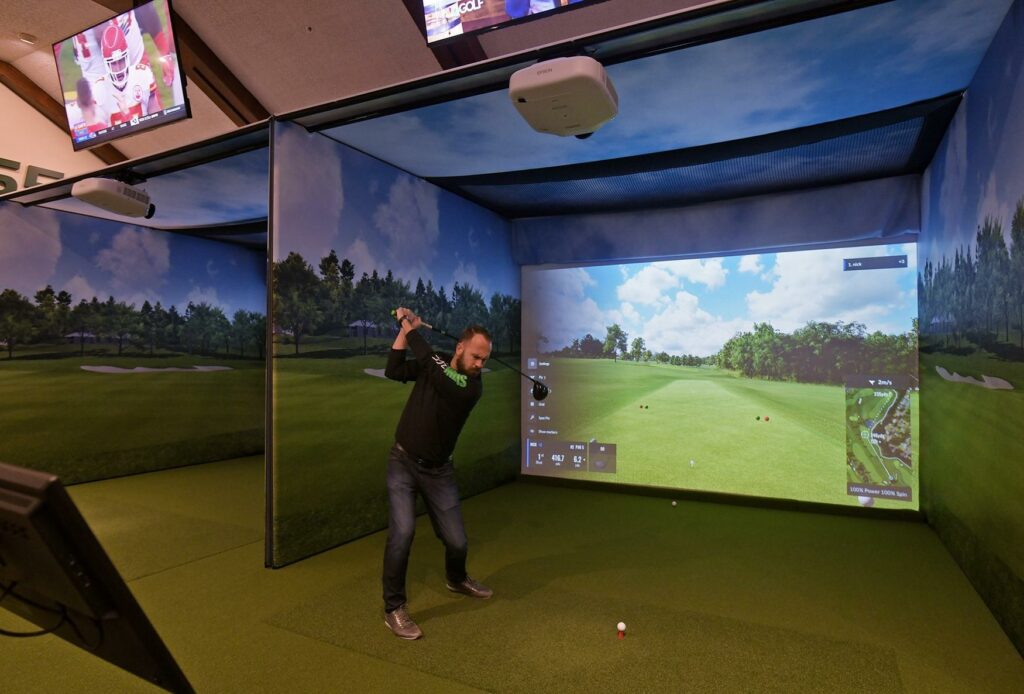 Our question regarding current usage and whether it’s problematic generated a mixed response. We had 19 percent tell us “there’s plenty of available time slots for all requested uses, whether by the professional staff or by golfers.” A little over 57 percent said “there’s a lot of demand to use the sim bay(s) but generally speaking everyone gets their requests fulfilled.” Meanwhile, 24 percent saw problems on the horizon, saying: “Often there’s more demand for usage than we can handle, to the point where additional capacity would be welcome.”

If you get drafted to help with building and programming a simulator amenity, consider asking a direct question about how it will be defined—as a training facility, like the academy end of the greengrass range, or, alternatively, as a member amenity like the swimming pool? You may not get a definitive answer, but you’ll at least be on the record about the need for all concerned to stay proactive about the purpose of the investment.

Definitely encourage people to “follow the money,” as you make suggestions about programming. For example, if you have a revenue-share with the facility, calculate whether a minor adjustment to that percentage (for the teaching and fitting you’ll do in the sim bay) could make your use of it more revenue-positive than member use would be, even when you include estimated F&B revenue during member use.

And don’t forget about playing lessons, which is where staff use and recreational use by members really overlaps—especially when the simulated course on-screen is your facility’s own layout. You might be able to negotiate yourself a higher priority for strategy-heavy playing-lesson sessions, given how instructive—but at the same time recreational—that use of the sim would be.