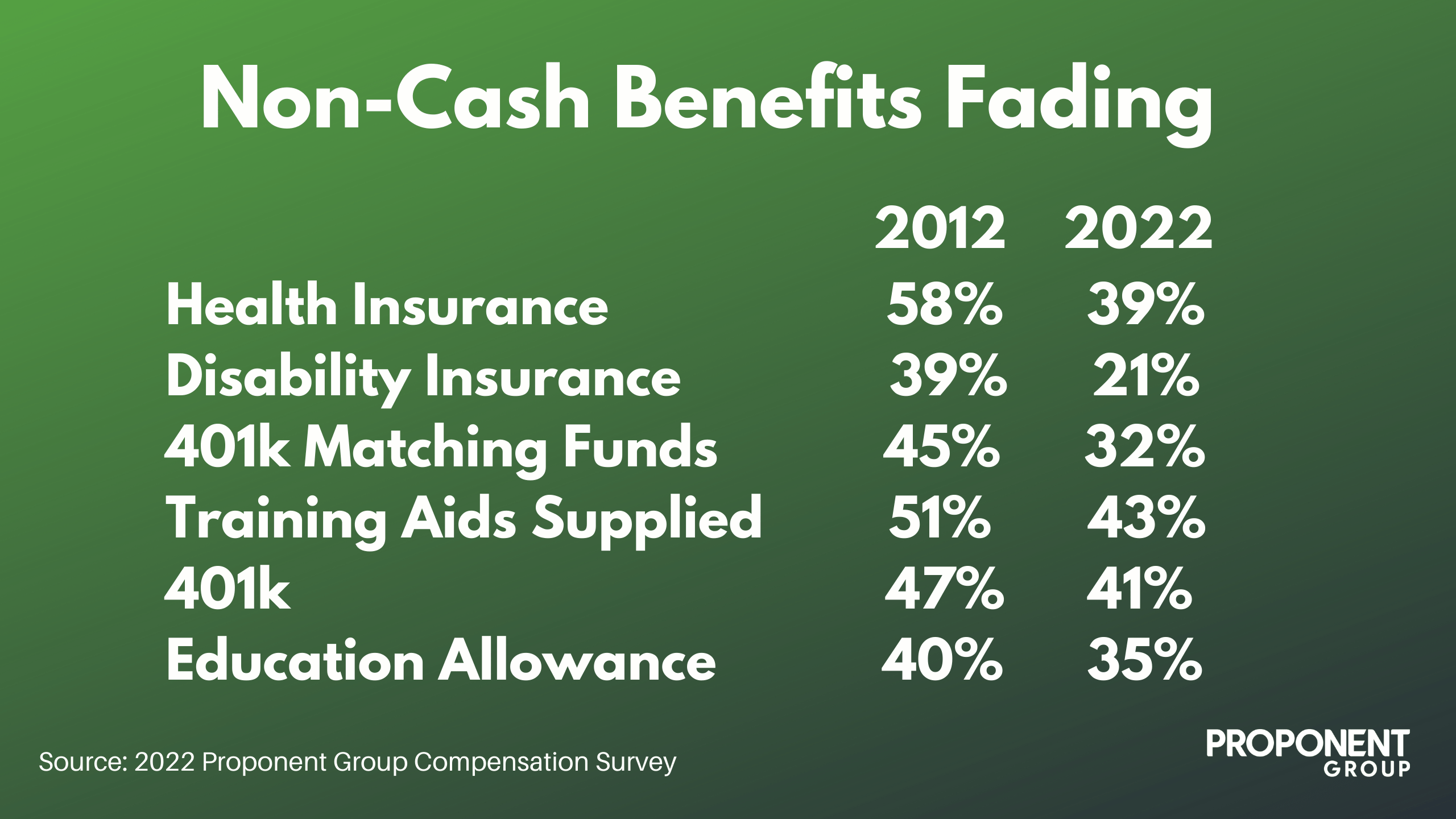 As we reported in our 2022 Proponent Group Operations and Compensation Survey results earlier this month, cash compensation over the past decade has increased for Proponent Group coaches at twice the rate of inflation. Since 2011 our coaches have seen a 40.3 percent increase in revenues compared to a 20.5 percent increase in inflation over that time. Our coaches should be very pleased with these results, but for those who are employees, the non-cash compensation side of the equation has been on a long losing streak.

Our survey has tracked 10 different non-cash benefits that employee coaches reported earning. Seven of them are down over the past 10 years while the other three were virtually unchanged. The biggest falloff was in health insurance coverage, dropping from 58 to 39 percent. Disability insurance dropped from 39 to 21 percent. 401(k) facility matching funds slipped from 45 to 35 percent while 401(k)’s in general slid from 47 to 41 percent. Only 43 percent of clubs helped pay for training aids, down from 52 percent a decade ago. Education allowances dropped five points from 40 to 35 percent while club payments for PGA and/or LPGA dues dropped from 51 to 47 percent.

The three non-cash benefits that remained steady were coach playing privileges at 95 percent, family playing privileges at 72 percent and tournament entry fees paid by the facility, the latter having inched up from 12 to 13 percent. Since most of our member coaches rarely compete in tournaments, these three benefits have virtually no hard costs for the club.

Proponent Group strongly suggests that when negotiating an employee position that you specifically ask about all of the non-cash benefits listed above, especially when the cash comp isn’t as strong as you were hoping for. Additional non-cash benefits may include free or discounted meals during work hours, an apparel allowance from the golf shop and/or equipment staff deals provided through the club’s manufacturer relationships. Many times non-cash benefits have very little hard cost to the facility compared to simply paying out a higher percentage of lesson income or a higher salary to the coach directly. This often allows for more negotiation than many coaches pursue before accepting a position.

For example, if you play in a lot of section events and the club wants you representing it in competition, but they don’t want to bump up your salary, ask if they will pay your section tournament entry fees instead. These could easily total $1,500 or more per year. For a variety of reasons beyond your control, the club may be much more willing to pay the entry fees instead of just adding the same amount to your salary. Asking for an increase in non-cash benefits can also be a way to lessen the blow if an expected raise becomes stalled.

For some of our members with beefy non-cash benefits the value can run well over $15,000 annually so it’s worth paying attention to any opportunity to boost your available non-cash compensation. This is especially true at a time when these benefits are generally eroding for golf instructors.